Leading up to a 21km run in – April 2016, after much procrastination, I bought my umpteenth pair of Asics running shoes from Tekkie Town in Boksburg. It was the first time that I bought from Tekkie Town and they turned out to be reasonable in comparison to other Asics stockists. The next day, I took this shiny new fiery orange pair of Asics Gel Nimbus 16 for a half marathon and sustained injuries that took to me days to recover from. 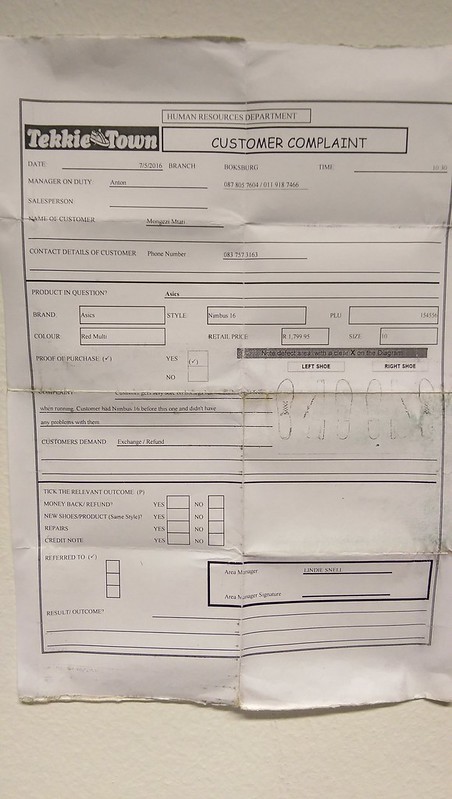 Some runners would say brand new running shoes aren’t great for races, as though they should be broken in and taken for some runs first, which I attributed the nearly broken legs to. Truth be told, I never had that problem in a pair of Asics. Five runs later, the problem persisted and I phoned Asics to find out what the issue could have been. This was not getting any better, I would suffer for a day or two before getting back on the road because of injuries.

On 4 May 2016 – a lady by the name of Kiera Powell took my call at Asics and she assured me that she would take care of the issue and that the call would help to speed up the process. She further advised that I return the shoes to Tekkie Town because they needed to assess the quality of this new pair of Gel Nimbus 16. According to her, the quality of the cushioning can sometimes deteriorate if the shoes are stored for too long. She also advised that I send an email with my details and a picture of the shoes which will form part of their assessment, which I very quickly did.

Part of the assessment includes images that the store sends to the manufacturer where they ascertain whether there is damage or not. That said though, the stockist – Tekkie Town in this case – knew exactly how to take the images. I’m no expert at photography or running shoes and I trust their just judgement.

The next step was to take the shoes to Tekkie Town in Boksburg – limps and all – and these were received by a friendly store manager who advised that the Asics consultant would assess the shoes and make recommendations. Anton said he would call me in a week and that went the same way as the emails from Asics, but when I eventually got a hold of him about two weeks later – he was just about to dial my number. Just about. Had I just waited another five minutes, he would have called with feedback to say the Asics consultant saw the shoes and they would revert with feedback. 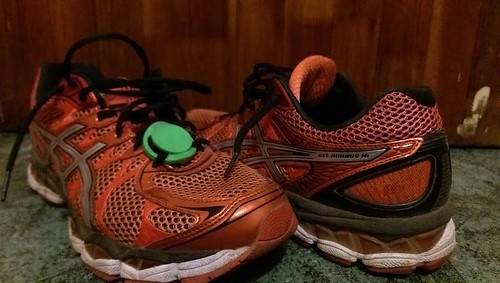 Kiera Powell, had still not received my email or the report from Tekkie Town – she probably still hadn’t until I sent a tweet to their account finding out if she works there. These things get stuck in the mail, calls aren’t answered at Asics and well……the internet loses stuff and all.

By now, the old pair I was replacing began causing more injuries with every run that was meant to help mitigate the situation and it was better to buy another pair than to wait for Asics and send them more emails. Instead of not training, I got a new pair about a month later because there other one is still held captive. The assumption is that they completely taken the shoes apart and they are giving it thorough inspection. In fact, Anton left Tekkie Town and the new manager took on the case, also promised to return my call and she hasn’t.

Part of the theory is that it may be the wrong type of pair that the Asics Nimbus model was not right, but in fact I used a similar model for over a year. The one that this pair was meant to replace was also a Nimbus and it was as dream to run in.

Asics and Tekkie Town, when you read this – if you ever get to – please ask your labs and scientists how close they to concluding this case, it has now been four months. You have already phased out some designs and brought new ones in.

At the time of writing this, now in August 2016, I sent to tweet to Asics South Africa whom I think alerted Kiera Powell of the problem and she called but the issue still